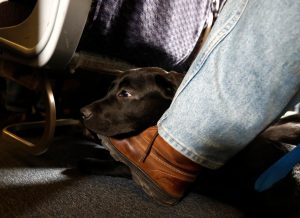 Airlines cannot limit the number of service animals on a flight, but will be allowed to deny boarding to an animal that is too large, too heavy or younger than four months, according to guidance provided Thursday by the U.S. Department of Transportation.

Officials are developing new rules governing what types of animals will be allowed to accompany passengers on flights and what documentation will be required to determine whether the animal’s presence is a legitimate need.

Proposed regulations are expected to be released by the department later this year and it’s possible new rules could be in place next summer or fall, officials said.

Until then, the information released Thursday is designed to clarify rules already in place.

The department’s work comes at a time when the definition for what is considered a service animal has grown to include animals travelers say they need for emotional and psychological support when flying. As a result, the number of animals traveling with passengers has grown dramatically, leading to conflict and sometimes injury.

According to the industry trade group, Airlines for America, the number of emotional support animals traveling aboard commercial flight increased from 481,000 in 2016 to 751,000 in 2017.

Last month, an American Airlines flight attendant received five stitches after she was bitten by an emotional support dog on a flight out of Dallas/Fort Worth. DOT officials also said they have received reports of severe biting incidents in which children have been severely scarred.

“Today’s action by the Department of Transportation is an important step to address what has become a mess of animals loose in the aircraft cabin,” said Sara Nelson, international president of the Association of Flight Attendants-CWA. “Clear rules are necessary to ensure access to service animal assistance for people with disabilities and our veterans, while maintaining the safety, health and security of all passengers and crew on board our planes.”

Service animals are animals that have been trained to perform a certain function, and under the Americans With Disabilities Act, reasonable accommodations must be made for a person using one. No training is required for emotional support animals, which has led to questions about their legitimacy.

DOT officials said that airlines will have 30 days to revise their rules to meet DOT’s current requirements. Officials said they will continue to review all complaints, but given their resources will focus their efforts on cases involving the most common service animals — dogs, cats and miniature horses.

“Airlines for America applauds the Department of Transportation’s enforcement guidance on emotional support animals (ESAs),” a spokesman for the trade group said. “With over a million passengers bringing ESAs on flights last year, airlines and airports saw a sharp increase in incidents such as biting and mauling by untrained animals. The DOT’s guidance is an important step toward addressing this growing problem and ensuring a safer and healthier travel experience for all.”

The questions of which animals should be allowed to travel in the main cabin of an airplane has been controversial. The department’s Advisory Committee on Accessible Air Transportation, established in 2016, took up but was unable to resolve the issue of which species should be allowed.

In a previous statement, A4A said the Department of Transportation should ” … define ‘service animals’ as trained service dogs, which would harmonize DOT’s definition with that of the more generally applicable Americans With Disabilities Act.” The group is also seeking to limit the types of emotional support and psychiatric service animals that must be accommodated “because these animals cause the majority of in-flight disruptions.”

However, groups advocating for those with disabilities have argued for continued flexibility, saying there should be a case-by-case look at which animals are appropriate companions.