Airlines would be allowed to ban emotional support animals, allow only service dogs under new proposal 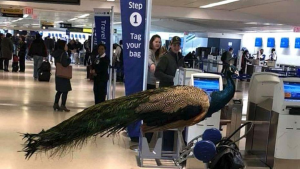 The U.S. Department of Transportation (DOT) has proposed a ban on emotional support animals, as well as a restriction on the types of service animals that passengers would be allowed to bring on planes, limiting them only to trained service dogs.

The DOT announced the proposal on Wednesday, in response to the rising numbers of support and service animals accompanying their owners during air travel, and to “ensure that our air transportation system is safe for the traveling public and accessible to individuals with disabilities,” per the DOT’s Notice of Proposed Rulemaking (NPRM).

“Today’s NPRM is intended to ensure a safe and accessible air transportation system. It addresses concerns raised by individuals with disabilities, airlines, flight attendants, airports, other aviation transportation stakeholders, and other members of the public, regarding service animals on aircraft,” the DOT wrote in a statement.

Under the proposed guidelines, emotional support animals would no longer be considered service animals, and actual service animals would be restricted to dogs that have been “individually trained to do work or perform tasks for the benefit of a person with a disability.”

Passengers flying with service animals would also be limited to two animals per traveler and required to check-in one hour earlier than those without, among other regulations.

The DOT added that it would not be requiring airlines to abide by these regulations if the proposal is adopted, but rather leave it up to each individual carrier to choose whether or not to enforce the rules regarding emotional support and service animals.

The proposal comes after both public and professional organizations, including the Association of Flight Attendants (AFA), had urged lawmakers to review the rules for service animal designations during air travel, to combat an alleged culture of “rampant abuse” of protocol. The AFA said in 2019 that the matter was escalating into a “safety, health, and security issue” that was “negatively affecting all passengers.”

“The days of Noah’s Ark in the air are hopefully coming to an end,” said Sara Nelson, president of the AFA in a statement released Wednesday. She also claimed that some of the union’s members “have been hurt and safety has been compromised by untrained animals loose in the cabin.”

“This is a wonderful step in the right direction for people like myself who are dependent on and reliant on legitimate service animals,” added Albert Rizzi, founder of the disability advocacy group My Blind Spot, per The Associated Press.

Critics, meanwhile, including the National Disability Rights Action Network, worried that the proposal would actually make it harder for travelers with disabilities to board their planes, and outright oppose the regulations.

“We are deeply disappointed that the Department of Transportation is taking such a restrictive view on the use of service animals. These proposals will make it much harder for people with disabilities to travel,” the group’s executive director, Curt Decker, said of the proposal.

“We acknowledge that some people have misrepresented themselves and their pets as people with disabilities with service or emotional support animals. But it is rare. These proposals are a vast overreaction to an uncommon problem.”