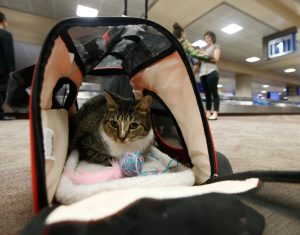 Airlines would no longer be required to accommodate travelers who want to fly with emotional support animals such as pigs, cats and rabbits, under new rules proposed Wednesday by the U.S. Department of Transportation.

The proposed rules, years in the making, narrow the definition of service animal to dogs that have received individualized training to do work or perform tasks for a person with a disability. Psychiatric services animals, which had not previously been classified as service animals, will now be included under DOT’s proposal.

The changes, DOT said, are an attempt to better define what animals should be allowed to fly and what rules travelers need to follow. The goal, the agency said, is to “ensure both safe and accessible air travel.”

Over the years, the definition of what is considered a service animal has expanded to include animals travelers say they need for emotional and psychological support when flying. As a result, airlines have seen a sharp increase in the number and variety of such creatures in the main cabins.

According to the industry trade group, Airlines for America (A4A) the number of emotional support animals traveling aboard commercial flight increased from 481,000 in 2016 to 751,000 in 2017.

The proliferation of animals has led to conflict and sometimes injury, but because federal law doesn’t address the issue of emotional support animals, airlines have had little recourse except to accommodate them.

But the question of which animals should be allowed to travel in the main cabin of an airplane has been controversial. The department’s Advisory Committee on Accessible Air Transportation, established in 2016, examined the issue, but was unable to resolve which species should be allowed.

Service animals are those that have been trained to perform a certain function, and under the Americans With Disabilities Act, reasonable accommodations must be made for a person using one. No training is required for emotional support animals, which has led some to question their legitimacy.

DOT officials noted that the proposed rule doesn’t prohibit people from flying with emotional support animals but the decision will be left to the airlines.

The proposal won praise from industry groups, who have long pushed the department to put limits on animals on planes.

Airlines for America called the decision to limit the definition of “service animal” to include only dogs that have been specially trained to perform tasks for an individual with a disability, “a positive step in protecting the legitimate right of passengers to travel with a service animal.”

“Airlines want all passengers and crew to have a safe and comfortable flying experience, and we are confident the proposed rule will go a long way in ensuring a safer and healthier experience for everyone,” said Nicholas E. Calio, Airlines for America’s president, in a statement. “We commend [Transportation Secretary Elaine] Chao for her leadership providing the clarity travelers, employees and airlines need by ensuring only dogs trained to perform specific tasks for individuals with disabilities are allowed onboard aircraft.”

The proposal also won praise from Sara Nelson, president of the Association for Flight Attendants-CWA.

“Passengers claiming pets as emotional support animals has threatened the safety and health of passengers and crews in recent years while this practice skyrocketed,” Nelson said in a statement. “Untrained pets should never roam free in the aircraft cabin. Flight Attendants have been hurt and safety has been compromised by untrained animals loose in the cabin.”

Other elements of the proposed rule would limit the number of service animals a person can travel with to two and would allow airlines to require those traveling with service animals to check in an hour ahead of the check-in time for the general public. Airlines would also be allowed to require that service an animal fit within its handler’s foot space on the aircraft.

DOT officials said there is no set timeline for when they will make a decision on a final rule.